Homeosavants in Marin county. Today’s Dissertation. The Fifth Phase of Matter. How to break the lightspeed

limit. This is intellectual prison talk, thinking outside

Quantum chemist Linus Pauling is the only person to win two Nobel prizes 100% . . and he graduated from Washington High School in Portland, Oregon AFTER winning the first one! His work supports homeopathy..

the brain cell. How to cause a thermonuclear reaction in the kitchen. Embarrassing science exposed.

The age of the Universe is stated by Ruling Science to be 13.8 billion years. Then They say its observable sphere to be 96 billion light years across. But if the age is true, wouldn’t the diameter of the Observable Universe be only 27.6 light years? How do they know anything about the other 69.4 light years?

Regard with caution: What follows is a prologue to a remedy suggestion for a nephritic syndrome case. I don’t know quite how to address this without sounding weird, but I’ll give it a try anyway. This is not to be taken as medical advice. If you have a medical problem, consult the medical profession. Be skeptical.

Please excuse its length, but I think you’ll find it interesting.

I had a difficult case once out of Pakistan where the patient had been to several homeopaths and tried a dozen different remedies for boils in his armpits and groin, to no success except suppuration, the flesh hanging down in shreds. It was a horrible mess and he had been suffering for a long time. I can’t imagine what the pain must have been like.

After having tried several remedies to no avail I simply sat down and prayed for an answer that came to me in a flash: Arnica. I looked it up and there it was: Arnica . . for crops of boils!

I instructed the patient to obtain an Arnica 10M, crush the pill between two spoons, stir into water, take a teaspoon into his mouth and spit it out.

Two days later he contacted me from Karachi on Skype, in a panic, having turned bright red. I told him to be calm, it was a sign the remedy was working.

I didn’t hear back from him for another week. When I did, he was ecstatic, he was overjoyed, he was cured. It had worked. The suppurated boils had shriveled up.

“You have done what others could not. You have healed me,” he said. I talked to him again couple months later. What he said made me slap my head: “I am taking up homeopathy as a profession.” The nature or will set you will will and will and are in a will and will not

I tried this method on other unfathomable cases and it has worked as well. In my mind I simply ask for the remedy and the answer comes immediately. Given my skeptical notions and absolute reliance on the literature I am highly suspicious of the phenomenon. I’m afraid to say I don’t trust it without researching the answer. It could be coming out of my subconscious, having prior read about the remedy and consciously forgotten it, or it could be a coincidence given the extensive indications that the remedies have within the materia medica, but I am more favorable to another explanation, the answer coming to me in the putative form of a little-known remedy.

For example, the last time I used this procedure was for a case involving vertigo. The answer came back “mustard”. I looked up the Latin for mustard, Synapis nigra, and found it as such in Clarke covering vertigo. Whether it worked or not is yet to be seen. Patient took it on the F scale, accidentally downed a whole bottle of water containing the final chord and aggravated.

I used this intuitive savant technique (IST) for the nephritic syndrome case and immediately the answer came back “marshmallow”, i.e. Althea off.

So here is the epilogue to this essay using IST on the nephritic syndrome case.

I haven’t been able to find much on Althea officianalis per se except it is indicated for bladder problems, but a little additional digging raises eyebrows. The Herb Wisdom site says

“Marshmallow works as a mucilage, producing a thick sticky substance that coats membranes. Marshmallow extract contains flavanoids, which contain anti-inflammatory properties. The flavanoids are able to reduce inflammation while the mucilage holds them in immediately place and prevents further damage. The extracts also induce phagocytosis, which is the process in which certain cells engulf bacteria, dead cell tissues or other solid particles. This helps speed up the healing process. The mucilage remains unaltered until it reaches the colon, which is why marshmallow works well on most inflammatory digestive disorders.”

What I found out next was my big wow:

Marshmallow contains Asparagine, first identified in asparagus juice. Asparagine, according to a 2011 study done at the University of Dundee, is required for normal kidney physiology and homeostasis.

“Although protein recapture and catabolism is known as a key function of kidney proximal tubular cells (PTCs), to date, no single protease has been shown to be required. Asparagine endopeptidase (AEP) is an unusually specific endosomal and lysosomal cysteine protease, expressed at high levels in the PTCs of the mammalian kidney. We report that mice lacking AEP accumulate a discrete set of proteins in their PTC endosomes and lysosomes, which indicates a defect in the normal catabolism of proteins captured from the filtrate. Moreover, the mice develop progressive kidney pathology, including hyperplasia of PTCs, interstitial fibrosis, development of glomerular cysts, and renal pelvis dilation. By 6 mo of age, the glomerular filtration rate in AEP-null mice dropped by almost a factor of 2, and the mice developed proteinuria. We also show that EGF receptor levels are significantly higher in AEP-null PTCs, which likely explains the hyperplasia, and we show that chemical inhibition of AEP activity suppresses down-regulation of the EGF receptor in vitro. Thus, AEP is required for normal protein catabolism by PTCs, and its loss induces proliferative and other abnormalities in the murine kidney, at least in part through defective regulation of the EGF receptor.”https://www.ncbi.nlm.nih.gov/pubmed/21292981

“If being is many, it must be both like and unlike, and this is impossible, for neither can the like be unlike, nor the unlike like.” -Zeno of Elea c. 490 BC

2016 AD – The trouble with science, the crack in their zenosphere, is the putative exclusion of electroplasma from the material phase continuum.

Nobelist Johannes Diderik van der Waals won the 1910 Nobel Prize in Physics for his work on the equation of state for gases and liquids, explains material phase changes to vectors of zenophobia.

Johannes Diderik van der Waals got the Nobel prize for making this point over a century ago, but apparently it either didn’t get to, or stick with modern academic larvae – – the fact that material phase changes are contiguous, and that includes the ionic phase of matter . . plasma.

In the science of homeopathy, this ignorance of phase mechanics by modern academia is a keystone point, it’s entirely overlooked, but . .

Like a guillotine it’s statements like these that get me in trouble with the vectors of xenophobia, the butt boys of PC science that

145 CASE STUDIES show adjunctive use of supramolecular drugs to be effective in intensive care, most notably sepsis, but PAUL MORGAN, M.D. lead sepsis consultant at Cardiff Univ, Hospital and vector of zenophobia  vehemently refuses to believe it or even put them to a test . .

dominate carpe diem Philosophy, egomaniacal biology Prof. P.Z. Meyer’s of Pharyngula being once again today’s featured example of one of them, a peddler selling millstones as charms to anyone who dares to stick his head through the stone’s hole to examine the proofs.

His last blahagh was a churlish slapdash review of my last Journal entry, the one reporting that the FDCA has listed . . for a long time now . . 1,000 or more homeopathic pharmaceuticals as legal drugs . . which homeopathy debunker Myers et al, like sepsis fuck up pioneer Paul Morgan, M.D. . have failed to debunk.

All he can say is John Benneth is a kook, music to my ears,

for it shows the rebuttal from the highest eschelons of science is still nothing more than the Null Hypothesis; no criteria, assay, taste, test or trial, just name calling and the sotto voce command to “ruin his life.”

Since someone already beat him to it (me) and as like cures like, the orders by iatrogenocidal maniac Morgan, pseudo scientist Myers and “Honest Liar”star stage magician James Randi to ruin my life should be welcome if the material mass of it could be stripped away and presented homeopathically . . I mean, it’s the mere thought of it that counts. 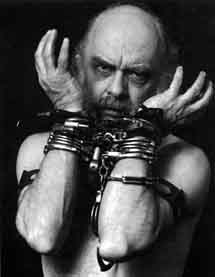 VOX POPULI, popular Vector Of Xenophobia,  JAMES “The Amazing” RANDI offered me $1,000,000 of Rick Adams’ money to prove homeopathy in 1999.

And if I am “a kook,” as Myers points out, “daft” as Morgan says, or crazy, a fraud and a “fucking liar” as Randi insists . . after calling me that for my reporting the theory and proofs for homeopathy, then what appellations does that tribe have for Nobel scientists like Behring, Josephson and Montagnier; top physicists like Conte, Tiller and Roy; clinicians like Hahnemann, Kent and Clarke . . and a lawmaker like Copeland . . for creating the theory and assays, and the proofs I’m being blamed for?

But even more cogent, what about this Dr. John Clarke, the M.D. I brought up in my last entrée,  referred to in the FDCA’s statute as the primary authority on homeopathy?

If I am a kook to Myers, daft to Morgan and a fucking liar to Randi, then what is this FDA bastion of homeopathic science John Henry Clarke, M.D. in comparison to me?

Perhaps we can learn something more on this score in the next installment of the John Benneth Journal . the world’s number one homeopathy blog..
# # #

Don’t thank me, thank the magic of homeopathy, one of the John Benneth Journal’s most popular entries, How Homeopathy Made Me Beautiful.

TAKE IT UP WITH GOD

It’s really nothing more than harassment of the traditionally superior medical doctrine of homeopathy by predatory practices (cloaked as medicine) to say to devotees that there’s no “science” supporting it.
How long have we been hearing this whining lie from patent pill pushers and the pseudoscientists that follow them, that there’s no “science” to homeopathy? How much longer do we have to listen to them misinterpreting Avogadro, claiming that it’s inert because there’s not one molecule in a homeopathic diluent? Why haven’t these fools been taught ionic theory and molecular dissociation? They should know by now, sticking a finger in a lit light socket elucidates the molecule to not be the only thing that can affect the human economy, nor is it the only active component of a pharmaceutical; when a molecule de-ionizes, its component electrons expand into the diluent and will continue to do so through countless serial dilutions, endlessly reproducing the effects of the solute: This is the soul of homeopathy’s physics. It may indeed be a true anomaly, but this isn’t a mere theory or novel invention, it’s been a known fact demonstrable by a NIST protocol of molar conductance for over a hundred years, that (as far as we know) the properties of the solute will perpetuate in the diluent throughout infinite dilution.

This should raise eyebrows, not hackles, but like any seemingly self-perpetuating phenomenon, in the name of cut and measure science it drives some people crazy, unless it’s a shut up effect, like the Methuselah half life of a radioactive element, and this is exactly what beta scintillation tests and actinic experiments on plants and animal subjects reveal homeopathic pharmaceuticals to be: Radioactive.

Perhaps there’s a better word for it. If there is I’d like to know what it is.

It’s not my CV to be solely prosaic without novelty, but none of this so far here is my invention. If you have a problem with accepting the physics of infinite dilution, don’t bark at me about it, it’s a fact, forget “science” and take it up with God.